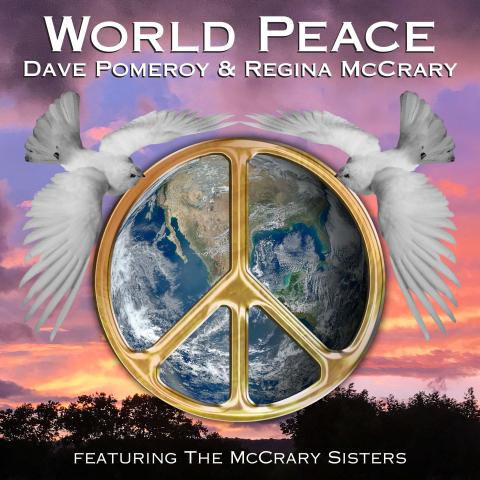 Today's the day! "World Peace," the new song by Dave Pomeroy and Regina Mccrary is now available on iTunes, Apple Music and many other digital services!

Earwave Music is proud to announce the September 11 release of “World Peace,” a new song written, performed and co-produced by Dave Pomeroy and Regina McCrary. They share lead vocals on this heartfelt plea for tolerance, understanding and global unity, that will be released on September 11 on all digital platforms in honor of the victims of 9/11 and in hopes of spreading peace and love instead of hate. The McCrary Sisters are featured on background vocals, and Dave played multiple basses, including 7 string slide bass and 12 string bass. Sam Bacco played percussion using instruments from all around the world, and the recording was engineered and co-produced by engineer extraordinaire Dave Sinko.

Bassist, writer, and producer Dave Pomeroy has played on over 600 albums with a diverse list of major artists including Willie Nelson, Peter Frampton, Earl Scruggs, Elton John, Emmylou Harris, Keith Whitley and Trisha Yearwood. He has performed live with Steve Winwood, Johnny Cash, John Hiatt, Vince Gill, and Jimmy Hall, and appeared on TV with Vince Gill, Earl Klugh, Eric Johnson, Guy Clark, Kris Kristofferson, and many other artists. His songs have been recorded by Chet Atkins, Don Williams, and the Sweethearts of the Rodeo. He was named Nashville’s “Studio Musician of the Year” in 1991 and “Bassist of the Year” in 1997. He has released 12 albums and 2 full length videos on Earwave Music, including the documentary “Sleepy LaBeef Rides Again”,” and his latest all-bass and vocal solo album, “Angel in the Ashes,” was released in 2017. In addition to his musical career, Dave has been President of the Nashville Musicians Association, AFM Local 257 since 2009 and advocates for musicians and all content creators’ intellectual property rights.

Singer, author, and actress Regina McCrary is the daughter of Reverend Samuel McCrary, one of the founders of the iconic gospel vocal group The Fairfield Four. She recorded her first Grammy-nominated lead vocal at the age of 7 with the BC&M Mass Choir, followed by Ray Stevens’ “Everything is Beautiful,” at the age of 9. She harmonized with Elvis Presley at 12, and at the age of 20, sang with Bob Dylan on his classic “Slow Train Coming” album, tour and two more albums, “Saved” and “Shot of Love.” She has written critically acclaimed books and her acting career includes Tyler Perry’s “Diary of a Mad Black Woman.” She has collaborated with music legends like Dr. John, Jack White, Mavis Staples, Bonnie Raitt, Gregg Allman, and Carrie Underwood. Regina’s powerful voice and positive energy are legendary, and with her siblings Ann, Freda, and Deborah as The McCrary Sisters, has recorded numerous albums and have performed on Saturday Night Live, the Grammys, ACM, CMA, Billboard, and the Americana Music Awards and more over the past two decades.

“World Peace” is the first musical collaboration between Dave Pomeroy and Regina McCrary, and the end result speaks for itself. Music is a powerful force for good, and the message of this song is clear – “World Peace – That’s what we want to see.” It’s time that we learn to respect our differences and celebrate all that we have in common with our fellow humans around the globe. Thanks for listening and spread the word!