Dave Pomeroy - Angel in the Ashes 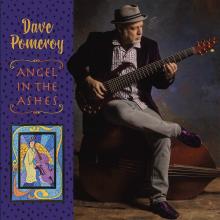 Bassist, vocalist, writer, and producer Dave Pomeroy's new solo album, “Angel in the Ashes,” is now available through this website! More than ten years in the making, this ambitious project brings together a myriad of influences, sounds, and songs into a unique musical journey. Every note of music on this record is created by Pomeroy on vocals and 41 different acoustic and electric basses. The genre-bending album features nine Pomeroy originals, including four instrumentals, and covers of songs by Guy Clark, Charles Mingus, Jesse Winchester, and Buddy Mondlock. The title track is an uplifting reflection on the life lessons learned from Pomeroy’s tragic 2009 house fire. The production ranges from the live acoustic bass and voice performance of “Date with a Bass” that opens the album, to the album’s tour de force “Ball of Money in the Cloud,” a medley of the Temptations’ “Ball of Confusion,” The O’Jays’ “For the Love of Money” and the Temps’ “Cloud Nine.” This 8 minute plus epic features more than 50 tracks of basses and vocals, as Pomeroy conjures up a one man all-bass orchestra and choir that deliver the powerful message of these classic lyrics, written 40 plus years ago that are still just relevant today, if not more so. This album captures the essence of Pomeroy’s life in music to this point, and offers an intriguing glimpse into the future as well.

The Reviews are in and the critics are raving!
ROBERT K. OERMANN – MUSIC ROW MAGAZINE
“This longtime instrumental great has been working on his new CD for 10 years. The wait has been worth it, because the collection is wildly inventive. This pop-folk title track has a warm vocal as well as his customary virtuoso bass playing. In addition to a heaping helping of originals, he covers tunes by Guy Clark, Jesse Winchester and Buddy Mondlock, not to mention jazzbos like Charles Mingus (“Goodbye Pork Pie Hat”). Don’t miss the album’s centerpiece, his eight-minute funk medley of “Ball of Confusion,” “For the Love of Money” and “Cloud Nine” (50 audio tracks deep). This is a fantastic listening experience.”
JIM ROBERTS –AUTHOR/EDITOR - BASS PLAYER MAGAZINE
Angel in the Ashes is a superb album—beautifully conceived and beautifully executed by a master musician. Bass players will love it because of the way Dave has used his basses to create so many sounds, but anyone can appreciate the artistry and deep emotional content of the music. Extraordinary!”

JOHN LOMAX III – THE NASHVILLE SKINNY
“Nashville Musicians Union President, Dave Pomeroy, steps out majorly on Angel in the Ashes as an engaging vocalist, interesting songwriter and adept interpreter of outside material. Here’s the WOW factor: Dave made this album using only his favorite instrument: bass, in fact, 41 of them! Here’s the thing: you will not notice or care that there are no guitars, drums, keyboards, banjos, fiddles or other instruments. This is a wonderful, positive, uplifting record!”