The Day The Bass Players Took Over The World - DVD 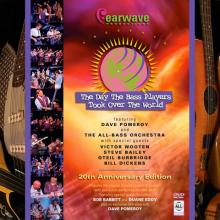 Dave Pomeroy and The All Bass Orchestra
Price: $15.00

“The Day The Bass Players Took Over The World” is an historic and earth shaking video from Dave Pomeroy’s “Basses Loaded III” concert performances in Nashville, featuring Dave and the All-Bass Orchestra with special guests Victor Wooten, Steve Bailey, Oteil Burbridge and Bill Dickens. It had a big impact and excellent sales when it was released on VHS in 1996, but has been out of print for some years now, and Earwave Music is now releasing it on DVD for the first time ever. This new 20th Anniversary Edition marks the anniversary of the first “Basses Loaded” show in 1994, and includes the original one hour video from 1996, lots of bonus material including the 2011 mini-documentary “Building The Bass Orchestra,” and previously unseen performances from 1994, 1997, and 2004, including special guests Duane Eddy and Bob Babbitt. For bass players or music fans, this is a completely unique experience! Look out below…